“The higher we soar, the smaller we appear to those who cannot fly.”
Friedrich Nietzsche.

1. Your scribe doesn’t know what Steve Maxwell and Ray were talking about across the way, but here are some of the topics discussed today on the Ladder of Knowledge:
– Uncle Pete explained how an electron was discovered. (No, it was not found hiding under the bed.)

– Mirko generously told us about the importance of diesel.

– Mr B made a passing remark suggesting that the last thing we should be putting on our bushfires is water. After all,  he explained, water is made of hydrogen and oxygen, and both are flammable. Uncle Pete believed he was serious and ridiculed him. That says a lot about Uncle Pete and a lot about what he thinks of Mr B.
(Oh, and oxygen isn’t flammable, but it will feed a fire.)

– Recently, in a prestigious Miami art gallery, an artist taped a banana to a wall and called it art. (Title: ‘Comedian’) Another artist chose to steal the banana and eat it, and he called that act ‘performance art’. (Title: ‘The Hungry Artist’) That artist was escorted away by Security but no charges were laid. The banana was replaced and the work sold for US$120,000. Is it any wonder why Mr B went on to explain why we should burn the Mona Lisa?

Today Mr B explained again why history should not be taught in schools, and he reiterated his challenge: “Give me just one example of how we have learned from history.” Since the challenge was issued four months ago no one has been able to give him an example. Until today!

By the way, Mr B is talking about banning history, not knowledge or ideas.

Daniel pointed out that Stanley Milgram devised his famous experiment because of what happened in Nazi Germany. “How could people follow such awful orders?” Milgram wanted to know. Daniel suggested that therefore, Milgram “learned from history”. Mr B accepted that point, even though Stanley Milgram gained knowledge from the experiment, not from that Nazi history. Mr B conceded that without that dark history Milgram would probably not have thought to do the experiment. So, although history didn’t actually teach us anything, it inspired us to acquire knowledge. That was enough to satisfy Mr B.

3. You can bypass this item unless you are one of the garden gnomes who insists that history is “the past”, and includes what you had for breakfast.

Your scribe’s ‘New Collins Concise English Dictionary’ (in book form!) defines the word ‘history’ as (1) a record or account of past events, developments etc. (2) all that is preserved of the past, esp. in written form. (3) the discipline of recording and interpreting past events.

In other words, dear garden gnomes, the term does NOT include events not recorded, such as the car that just passed you, or what you had for breakfast. Nor does it include the dinosaurs’ demise – that’s pre-history. (Yes, Peter, birds are dinosaurs. Sigh.)

Of course, the term is used loosely in colloquial fashion, in expressions such as, “The two men had a history between them”.

Would there be any danger in those garden gnomes not making their mistake yet again? Your scribe is weary of their inane, misinformed objections and I bet Mr B is too.

Besides, this scribe thinks Mr B has a point: do we really need to teach students about The Battle of Hastings? Or teach them any current version of any history? Don’t we have a moral and practical obligation to make use of our students’ time better than we do?

4. Speaking of garden gnomes, this one is getting into the Christmas spirit. The gift Mr B once received continues to sit proudly on his office mantelpiece. He tells me it is a constant reminder of the garden gnome foolishness he lovingly puts up with. 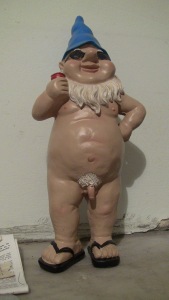 5. Santa Clause.  Andrew the ex-flasher explained why we shouldn’t trust solicitors. At 9am one morning eight police turned up at his door with a warrant, and did a ‘search and seize’ before arresting him. Andrew was facing 23 charges of ‘breaching a person’s privacy with a surveillance device’ and if found guilty, each charge could have given him a jail sentence of up to five years. If he were given consecutive sentences he wouldn’t leave jail alive.

Out on bail he sought a solicitor, but every solicitor he saw recommended a plea bargain. And, they would charge him $10,000 for their representation. Andrew was unimpressed with their slackness so he decided to defend himself. He read the entire Surveillance Act and found a little clause that said police can only ‘search and seize’ with the permission of an Attorney General. It was something the solicitors would have discovered had they bothered to do their job instead of lazily recommending a plea bargain. In court, Andrew pointed to the clause and the furious police had to discharge their witnesses. Andrew saved himself jail time and at least $10,000.

6. This week Mr B again suggested we install feral proof fences around the burned areas, and then reintroduce native wildlife when the trees regrow. He said the CSIRO claims there are at least 2.1 million feral cats in Australia. Those cats eat hundreds of millions of native animals every year, and kill even more without eating them. Plus, they eat the food native animals would eat. So, why not at least consider creating a few sanctuaries while we have the opportunity? No, said one grasshopper, because habitat loss is a far bigger problem.

He may be right, but jeepers, can’t we have a two-pronged approach? 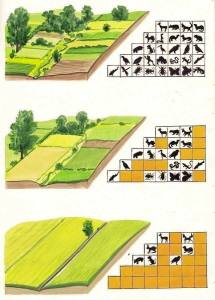 7. This week’s unusual creature in the Unusual Animal Series is the Chinese Mountain Cat. There are no feral Chinese mountain cats in Australia, to my knowledge. This one is trying to break into an internet cafe and visit our Facebook site.