“Poetry makes you remember what you didn’t know you knew.”
Robert Frost, poet.

1. It was a tough day, but an enjoyable one. The “dandelions” were out in force and the wind was gusting at times. All of that made it hard for the speakers. But they managed.

Passer-by Leila took the opportunity to speak on the Ladder of Knowledge. She had to put up with beligerant, overbearing hecklers, and with Mr B, who after half an hour had the temerity to ask for his Ladder back. (It was an affront to democracy to ask for it back.)

Leila explained why Scott Morrison is responsible for the current bushfires, and she said we all need to work together to save the planet from climate change.

Here is a smidgeon of what Leila had to put up with:

2. Under trying conditions (and with a poor use of notes) Mr B told the story of the blue rose.

For example, this woman married the Eiffel Tower.

3. Philip also spoke on the Ladder of Knowledge. Although he had nothing prepared, and little to say, he still managed to be interesting. He explained why we can benefit by becoming nose breathers. For the past two months, Phillip has been taping over his mouth while he sleeps, to force himself to breathe through his nose.

If only we could convince the hecklers to adopt that habit at Speakers’ Corner!

4. Mr B read the poem, ‘To My Husband On His Retirement’, by Cheryl Caesar. It was about a woman’s concern for her husband’s fear of retirement. For copyright reasons we can’t include the poem, but here is a photo of a couple who may have left their retirement just a little late. 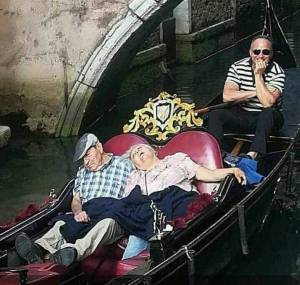 5. Other topics discussed:
– John August from the Pirate Party (and Radio Skid Row) talked about how 30 years ago people could buy a house and raise a family on one income, and now we can’t. He explained the reasons why.

– Andrew, also from the Pirate Party, spoke about nutrition, and the relationship between carbohydrates and polyunsaturates, and how our diet is leading to an epidemic of diabetes.

– It was claimed that the Australian cricket team purposely do not ask the opposing team to follow-on because the higher-ups have “suggested” to the captain to not to impose it. Why? The television broadcasters have paid for the broadcasting rights and want to sell the advertising dollar. Result: the viewer watches needless cricket. (Mind you, it could be argued that all cricket is needless.)
Is not this corruption of the game far worse than ball tampering? Is it not worthy of a journalist’s inspection?

– We heard Part One of Mr B’s three part ‘Mind-Body Relationship Series’. This week it was about placebos. Next week it’s about nocebos.

6. In our Unusual Beast Series, this week’s unusual beast is the Armadillo. This one appears to be as shy as Mr Bashful, and it refuses to look at our Facebook page.