“And how shall you punish those whose remorse is already greater than their misdeeds?”
Kahil Gibran.

1. The thing about Steve Maxwell is that he is versatile. Not only does he have an extensive grasp of Australian history and Australian politics, and not only does he explore countless contemporary topics such as climate change and U.S. politics . . .  he is also an artist. And his art varies considerably in style as well. Today he used six of his paintings to help him examine climate change and make a protest. They were on display to inspire questions and discussions. 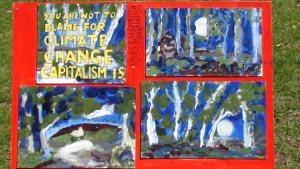 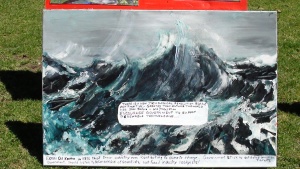 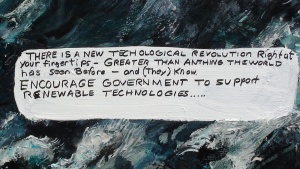 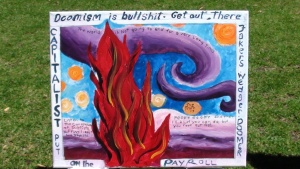 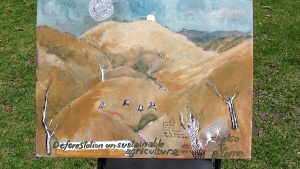 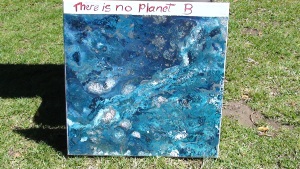 2. Mirko was yet again an annoying garden gnome. Each week he displays incredible rudeness by thrusting his material in front of people and talking about it, while they’re trying to listen to the speaker. We all still love him, but why?

On the other hand, Michael behaved impeccably. By not turning turn up. 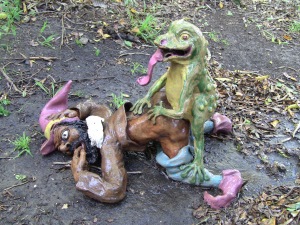 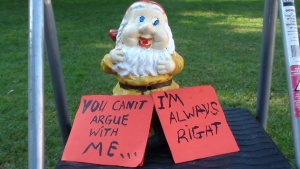 3. We enjoyed another session of playing ‘Would I lie to you?’ All four participants turned out to be liars. What a disgrace. Philip did NOT walk around with a stone in his shoe for a week. Jackie did NOT find a body in a national park. Uncle Pete does NOT have a PhD. Peter the Younger did NOT go to the wrong funeral and only realise it the next day.

What’s the world coming to?! 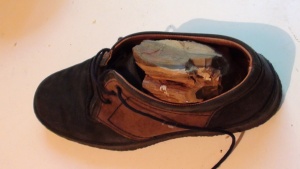 The stone in Philip’s shoe? No, he was lying!

4. Sashin got up to read us an excerpt of a poem, and some quotes. From a chair in the audience, Mr B politely interrogated Sashin about the gist of what he was saying, which was about the role of meditation in dealing with suffering. It was an eye opener to see Mr B polite. 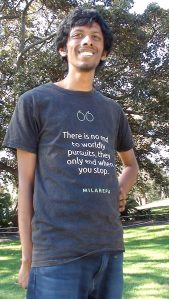 5. Mr B regained the Ladder of Knowledge and responded with some rhetoric about the merits of anger, though at one point a young woman called Jackie proved him wrong. Mr B doesn’t appreciate troublemakers proving him wrong and if we had had some security at Speakers’ Corner, Jackie would have been ejected from the park.

But we don’t, so she stayed.

Then Philip took the Ladder of Knowledge to speak about the body’s relationship with the mind, and whether or not trees and other plants can in some way know what the hell is going on around them. (If they do, they are are faring better than some of the hecklers.)

We learned that a slime mould learned to find its way around a maze. But did it cheat?

6. Mr B has submitted yet another chapter of his interminable book about resilience. This chapter sounds like it would suit upcoming Halloween. It’s about Charlotte and the Creatures of the Dark Forest. 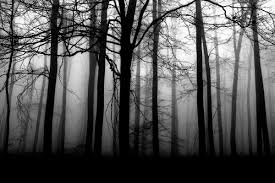 7. Other topics discussed:
– What makes you angry?

– From where to emotions come? What part does the gut and its microbes play?

– One fellow turned up to talk about the existence or non-existence of God. That’s about the only topic Mr B refuses to talk about. So, the fellow moved to another vacant ladder nearby and raised the topic. We hope he persists, because once he gets the hang of it he’ll attract a big audience.

– Meanwhile, across the way, Ray continued to patiently try to save  a few passers’-by souls. (Did you like that plural and the apostrophe? Perhaps Mr B is right: we should simplify spelling and get rid of apostrophes.)

– Helmut spoke about how and why tennis players purposely lose tennis matches, and end up richer because of it.

– Six questions from Mr B helped us explore ethics.

– The slaughter of unwanted racehorses. What Pollyanna world are people living in if they didn’t realise that was happening? Mr B put forth a plan.

– We did “You’re a tree” again. This time the tree had no idea where it was, or what water was, or anything, because it was a tree and, as we have established, trees don’t tend to know what the hell is going on. Nevertheless, the experiment was enlightening. 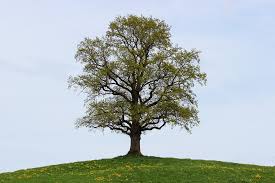 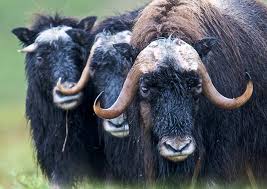 9. Mr B has finally given up waiting for his damsel to reappear. He tells your scribe he is taking a new approach: he will be playing hard to get.

Good on him, but this is all getting a bit silly, and your scribe will no longer report on Mr B’s efforts to find his one true love. (Or her sister if she’s better looking.) 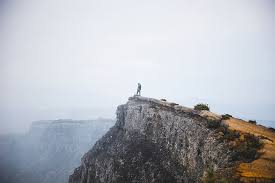 Mr B, playing hard to get.