1.Before the chairs were even unfolded the discussion became heated. ‘Who is at fault?’ was the question. ‘The Palestinians or the Israelis?’

The ‘whispering geriatric’, Albert, found his voice. His whispers boomed across the park. The other ancients discussing the matter were loud too: Steve Maxwell, Mr B, Peter the Heckler, and Albert’s wife, Jean. All of them stood around like obelisks. If they had shut up for five minutes, passers-by would have thought Stonehenge had come to Speakers’ Corner.

2. It wasn’t all just ancients. A group of young men and women turned up to begin Sydney’s Biennale. Apparently Speakers’ Corner was once the site of indigenous corroborees, and the group had turned up to honour that.

Mirko generously interrupted their speeches to set them straight about the dated 20th century science. No doubt, the small group was grateful to be given the truth.

After being enlightened and having their lives enriched (good job, Mirko) they completed their speeches and then walked to Circular Quay, the front doorstep of where Australia was once invaded over 200 years ago.

And it’s not what you would call a corroboree.

Steve Maxwell would corroboreet that.

4. Rhonda is back! Steve gave up his podium to let her speak. This scribe heard little of what she had to say, but the bit he did hear was a complaint about the ban on megaphones in the Domain. Rhonda speaks at Melbourne’s ‘Speakers’ Corner’ where the speakers take turns to use a megaphone.

This scribe thinks Rhonda has been spoilt. After all, it’s not as though she has a soft voice, like our geriatric whisperer, Albert. This video (taken two years ago) is a reminder of how good she is without a megaphone. (And of how loud.)

5. Ray, our fundamentalist Christian, is a cad and a bounder. At 2pm it begin to spit. Heavy rain looked imminent. According to Greg, a regular heckler, Ray said a little prayer to God something along these lines: ‘Dear God, I speak from 2pm to 4pm. Would you please hold off the rain until 4pm?’

The rain held off until 4pm.

As Ray left at that time there was a smirk on his face a mile wide. That’s when Greg told this scribe about Ray’s little prayer two hours earlier. I grabbed Ray as he was going, and Ray confirmed it. He had made the prayer. His smirk grew even wider.

Naturally, I called him a name unmentionable, pointing out that while he was praying he could have asked for an extra hour for the rest of us speakers. His smirk exploded into a smile and he walked away. He really is a cad and a bounder.

6. It can be argued that at Speakers’ Corner good old Peter the Heckler treats strangers just like family.

It’s true. They only have to say something he disagrees with and he yells at them, like he’s known them all his life. Today a young woman said she believed in God but was not religious. That was enough to get Peter in a tizz, and be ‘forthcoming’.

She bore it well. As did her companion, when Peter turned on him.

I think the young woman would agree with the picture below. 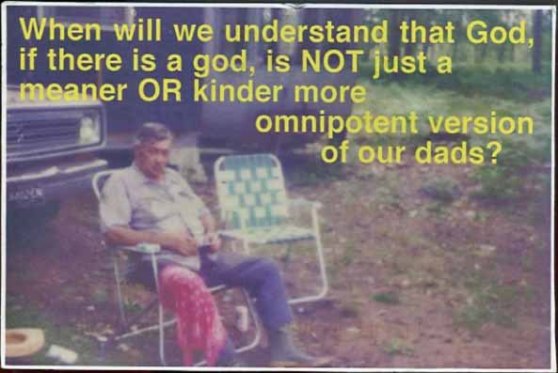 7. The subject of over-population came up, and Mr B concluded that nothing could be done about it, because it was human nature to want to have children. This postcard from the postsecret site gives a hint of that need. 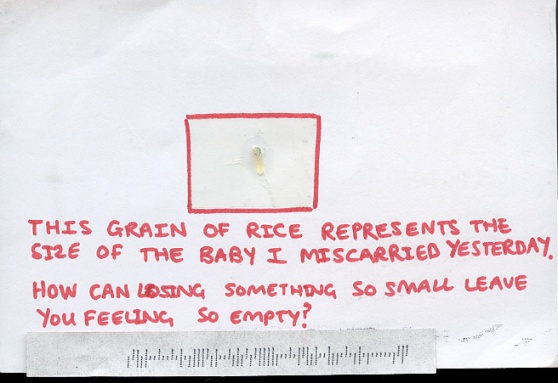 8. If it must be known why Mr B was bald today: the day before, he had given himself a ‘number 4’ haircut with his electric trimmer. But he had forgotten to attach the ‘number 4’ attachment. As a result, he cut off a long strip of hair back to the scalp before he realised. So he had to cut the rest off, too.

It could happen to anyone.

Before you cast judgment, just remember that Albert Einstein was a moron too. Einstein used to put his pants on backwards, or something like that.

9. Here is a quote from last week that deserves to be recounted.

Of a homeless person, Andrew Toth said:
‘He would be a chain smoker if he could find enough butts.’